Dr. Eubanks has enjoyed a dual career as both artist and art educator. She has taught photography at both the secondary and university levels, and retired as Associate Professor Emerita of Art Education, College of the Arts, Georgia State University. Her work has been published multiple times in the art education literature. Since retirement she has also produced two of her own books:  Pinhole Possibilities: High Art on a Low Budget (2013) and The Family Table: Recollections and Recipes (2015). Eubanks has exhibited her work widely in solo and group exhibitions such as Altered States at the Georgia Museum of Art (Athens, GA), The South by Its Photographers at the Birmingham Museum of Art (Birmingham, AL) and The Red Clay Survey a the Huntsville Museum of Art (Huntsville, AL). Her work is included in public and corporate collections in the South.

Eubanks has worked in black and white silver prints, often hand-coloring them, type C color prints, and now digitally generated prints on rag paper. Her work is sometimes three dimensional, moving both backward and forward beyond the primary picture plane by several inches. In her words “For decades I have cut up photographs and combined them to form new worlds. Now I explore these new world creations using Photoshop.” Her most recent art captures the coastal encroachment of rising waters, stimulated by climate change, creating new and alarming visions of her beloved southern coast. “Nowhere else on the east coast of the US are there so many islands so close to their natural state. Most of our fourteen barrier islands are the nearly 360,000 acres of marshlands that protect them are undeveloped.” 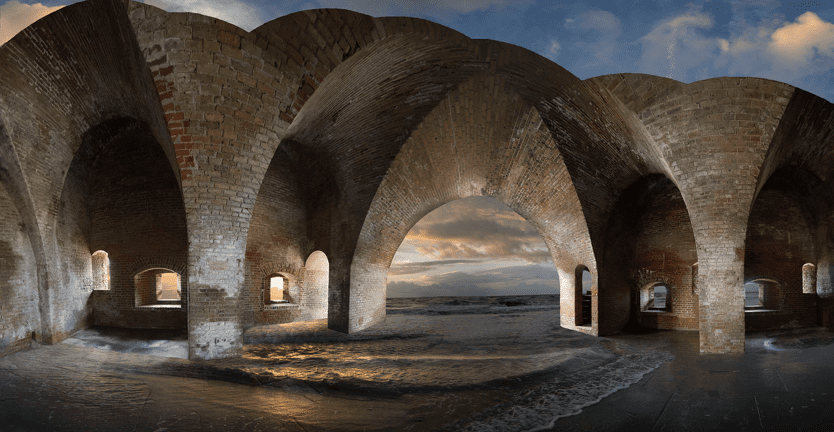 Her subject matter is wide-ranging but throughout her career she has consistently returned to the Georgia coast for inspiration and imagery. Dr. Eubanks grew up near the coast and played on the beaches of St. Simons Island and Jekyll Island as a child. She first visited Cumberland Island in the mid 1980’s and returned as often as possible, renting a house that was behind the last dune and under the first oak tree. In 1992 a Sea Grant took her to Ossabaw “the most beautiful of the barrier islands with long bands of marsh stretching as far as the eye can see through the island and driftwood forests decorating its beaches.”  She returns to Ossabaw often and has also visited and photographed Sapelo and St. Catherine’s Islands.  Just before the property she rented on Cumberland was to become part of the National Park, she and her husband bought a house on Little Cumberland, a privately-owned island attached to Cumberland. It is a very rare example of virgin climax maritime forest because it was never farmed—one-lane dirt trails and a few homes hidden in the woods are the only compromises. They split their time between a home on St. Simons and Little Cumberland where she is helping record data for an erosion study by geologist Dr. CJ Jackson of Georgia Southern. She is also involved in “100 Miles” an organization that advocates for preservation of the Georgia coast.

EDITED AND APPROVED BY PAULA EUBANKS